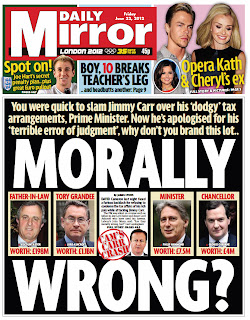 By attacking Jimmy Carr, Cameron has extended the debate about tax avoiders beyond the broadsheet reading ‘chattering' classes to the tabloid reading masses in a way Uncut could never of dreamed of: A debate that is going to hurt nobody but him and his vile mates. From being the Conservative  Party’s prime asset Cameron is now exhibiting such a level of political incompetence that he is becoming a liability.
Posted by Dan Westlake at 14:41 No comments:

Posted by Dan Westlake at 14:49 No comments: 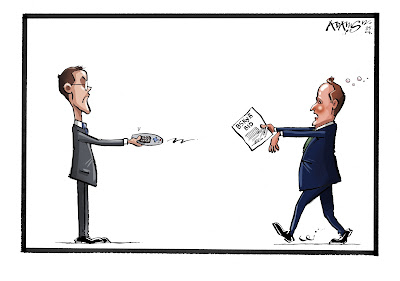 The cosy texts, late night calls and socialising between cabinet ministers and News International's inner sanctum, particularly evident in the familiarity of the language used, reveal that the ‘Coalition’ we are currently governed by is not a coalition between the Tories and their idiotic alibi - the LibDems, but between a party less than a third of country voted for and a, primarily American owned, multinational corporation that NO ONE voted for.

The Independent: Rupert Murdoch’s Men On Th Inside

Posted by Dan Westlake at 05:21 No comments: