The Artist in The Age of Digital Reproduction 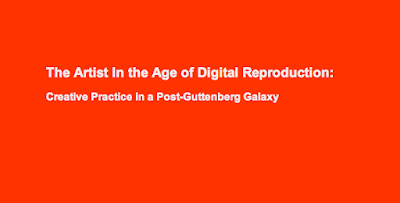 "The world is full of objects, more or less interesting; I do not wish to add any more" Douglas Huebler - 1969.


1) In advanced capitalist societies we experience  the triumvirate fetishization of progress, production and representation as total ideology mediating all sites of social exchange including art's institutions. Gross Domestic Product (GDP) is absurdly still viewed by the mainstream media, the most powerful manifestation of what Louis Althusser termed the  Ideological State Apparatus (ISA), as the key indicator of a nations well being - that is production, regardless of what is that is being produced, is in and of itself viewed as a good thing - while the former ruler of The Kingdom of Bhutan Jigme Singye Wangchuck's sensible and pragmatic concept of Gross National Happiness (GNH) is, in an example of advanced capitalism's power to pervert, patronised as eccentric and quirky.

2) In the modern city where the phenomenological terrain is dominated by simulacra and the hyper-real we are constantly confronted by advertising and other forms of seductive capitalist propaganda creating the illusion of need for yet more product. Strategies of distraction deny us the space to contemplate the emptiness, what  Hegel termed the ‘dark, shapeless abyss’, that exists silently lurking behind the shiny facade of our consumer driven society as it does behind all things. An ideology based on spectacle succeeds because we fear nothingness and wish it to be kept at bay so are grateful for any distraction.

3) In such a society free non-contaminated space paradoxically becomes the most valuable of substances. In a terrain of hyper-stimulation designated art-spaces can provide a site where an individual may for a period of time inhabit a zone free from the pressure to either produce or consume. Unfortunately this experience is often denied us by the actual art objects placed in this precious arena. A valuable experience is thereby denied by ‘needy’ art objects demanding, like infants, our attention.Thus art provides yet more of the spectacle and distraction that denies us the opportunity to simply experience the essentially empty nature of being.

4) From Moses to Marx the problem of idolatry - the worship of false idols - has been a consistent feature of the human condition. We appear hardwired to search for existential redemption and whether we put our faith in monotheistic Gods, technological progress or a sports team we do so to deliver us from the void of a meaningless existence and into a indefinitely deferred promised land. Marx warned of the error of commodity fetishism - the worship of things - while himself fetishizing production and exhibiting a messianic faith in progress through dialectic materialism.

5) In advanced capitalist societies we don’t actually worship products themselves but the abstract concepts they represent such as youth, beauty and wealth. The relationship between consumable products and these abstractions is mediated through the use of lens-based imagery by the ISA in the form of advertising and entertainment. The seductive gloss of these images is an ideal so far removed form all possible realities of youth, beauty and wealth that finally it is not even these abstract concepts themselves we worship but their actual representation. Such is the all-pervasive ubiquity of this image lead spectacle that the possibility of artworks based on lens-based imagery, even those produced as explicit critiques of it, ever resisting its cooption is negligible.

6) Production is the intended outcome of labour a word that's etymological root derives from the Latin laboro: to suffer, carry burden or experience dis-ease. That which is laborious is something other than that which is pleasurable. In advanced capitalism labour is eulogized to such an extent that in the popular press its absence is portrayed as sinful. The most pronounced self righteous vitriol of the ISA in the form of the popular press is reserved for the two groups who are perceived to not labour enough;  celebrities and the unemployed more than any others including even economic immigrants who may be grudgingly accepted as long as the are perceived to be 'hard working'. With the advance of globalization this originally northern European ideology - the Protestant work ethic - spreads like a virus until universally normative. This 'work ethic', now virtually ubiquitous, is essentially the fetishization of suffering acting as an alibi for exploitation. Only a masochist or sadist would  celebrate such dis-ease.

7) The common denominator shared by ALL artists is that they select items to be exhibited. Duchamp's fountain applied a razor to all but that which was essential to the process of art making leaving only the choosing of objects to be shown, and the dematerialization of the art object that followed further dispensed with the necessity of the object to carry material form. The creation of art is then in essence an act of choosing and exhibiting, and where choice is exercised there is individuation. As an artist brings to the attention of others these acts of individuation that need not serve any utilitarian purpose it would appear that the primordial drive to create art is the affirmation of self through the gaze of the other. Art then is not a project born of altruistic intent but an existential need for self affirmation.

8) If one's primary drive to produce artworks is an altruistic intention to improve society the institution that is art may not be a site particularly conducive to such a project. While Duchamp (in)famously  stopped producing artworks to concentrate on playing chess Laurie Parsons, a sculptor working with found objects in the 1980's who appeared genuinely free of this need for self affirmation, stopped producing art work or calling herself an artist and became, instead, a social worker and advocate for societies most vulnerable

9) Though the drive to create art is not primarily altruistic that does not negate our ethical responsibilities as human beings. While to create art is always to produce more (however 'post' this production may be) even if the work is virtually immaterial, to not be reflexive and take responsibility for our contribution to a world already overloaded with objects and images is an ethical negation. Ethics should be grounded in the Hippocratic principle: Primum non nocere (first do no harm). Is our work merely going to add to the spectacle, co-opted by makers of designer labels to produce yet more pseudo-desire - more false need - in order to sell yet more pointless products using up yet more of the worlds resources?


10)  In the production of artworks: if less is more, *nothing* is absolute.

Posted by Dan Westlake at 04:20 No comments: