Why David Cameron May Have to Resign 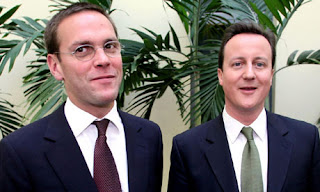 It has been established beyond all doubt that the News Corp regularly and systematically broke the law by illegally tapping (pinging, bugging etc) the telephone and email correspondences of celebrities, members of the public and, crucially, politicians. It has also now been established beyond all doubt the closeness of News International to David Cameron and his inner circle both professionally and socially. In fact the bonds where/are so close that it is not so much a case of connections between the two camps but of the News International/ Cameron Inner circle being single clique AKA the Chipping Norton Set.


This begs leaves the BIG QUESTION: This systematic illegal tapping of politicians emails and phone calls must have thrown up much that would have been absolute gold dust to the Conservative Party in the run up to the last general election, so did any the News International people ever pass on any of this information to either Cameron himself or any other member of the Conservative party? With, for instance, Andy Coulson ACTUALLY EMPLOYED as David Cameron's spin doctor, in the run up to the election, the idea that non of the information illegally obtained by News International, who's dishonesty has been highlighted again and again during this scandal, was never passed onto the Conservative party would appear absurd. To believe this never happened one would have to believe these people (who A) had access to such illegally gained information B) have been proven to be systematically dishonest & C) were working for a Tory election victory) when coming across such information made a decision every-time NOT to pass it on to Cameron or the Conservative Party??? Now if the passing of a single piece of this illegally gained information from News International people to David Cameron or others in his inner circle can be proved It would all be all over: Cameron would have no choice but to resign and would probably be facing criminal charges. This is our Watergate.

PS. look out for plenty more laptops to 'misplaced' in the carparks of Westminster and the fields of Chipping Norton  in the coming weeks...
Posted by Dan Westlake at 09:25 1 comment:

Come Over by westlake72
Posted by Dan Westlake at 03:22 No comments: 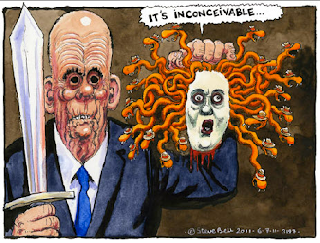 Rebekah Brook’s famous, weird, obsession with pedophiles is that they may have represented the one group she felt able to posture from a position of  relatively moral high ground. The recent revelations - her disruption of the investigation of a child murder for one - take even that away from her. We should not though get overly obsessed though with the vileness of Wade/Brooks. The real issue is the deep links between the Murdochs, Brooks, Camerons, Coulsons, Yateses of this world (and the previous Brown/Blair regime) and the cowardliness of the current opposition - with a few extremely honourable exceptions (Chris Bryant, Tom Watson, John Prescot), respect to Norman Fowler too (that’s a sentence I never thought I’d write).

BTW We have set up a Facebook group here: Withdraw Rebekah Brooks UAL award now! to get the University of the Arts to withdraw the Award of an Honoury fellowship to Brooks for 'outstanding contribution to journalism’ (LOL).
Posted by Dan Westlake at 03:15 No comments: