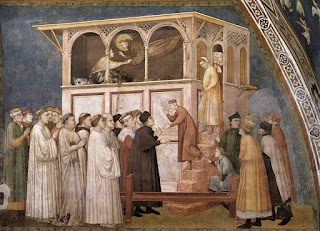 The Beginning of the End:
Art as an institution (as opposed to a term simply bestowing praise on creativity or skill, or a term referring to man made objects of cultural interest better described as: artefacts) is a construct centred on artists producing artworks. It is not a natural, timeless or universal phenomenon, but a specific geo-historical construct that can be traced back to Cennino Cennini's writings on Giotto di Bondone (see above) in 1390 at the birth of the Renaissance.It is a construct that has been skating on thin ice since 1917 when Duchamp entered 'Fountain' for the summer show of the Society of Independent Artists. With ‘Fountain’ Duchamp applied a razor to all but that which was essential to the process of art making, leaving only the selection of objects to be shown (i.e. to bring to the attention of the ‘other’). Though initially rejected it could be said to exist today, iconic, as a signifier of contemporary art i.e those that except as a given that it is an Artwork may be considered inside the institution – while those that doubt its validity: outside. ‘Fountain’ broke the link between art and (physical) skill or (hand-) craft that had previously appeared axiomatic. Problematically though If any 'thing' can be an artwork, (and the ‘dematerialization of the art object, that later followed dispensed even with the necessity of an artwork to carry material form), the concept of 'art' as a term delineating a specific, differentiated, field of creative practice, becomes unstable. When neither technique nor *form can any longer identify that which is *art from that which is not *art, the entire construct becomes entirely contingent on the specialized status of the *artist, who holds a privileged position whereby only he/she possess the unique, alchemic, power of nomination. But as the artist can no longer be clearly identified by any specific skill or technique his/her status as such, i.e this role, which enabled him/her to declare X, an artwork, becomes entirely dependent on the fiat of arts triumviri of institutions - its galleries and museums, critics and theorists, and: educational institutions.

The End of Art:
Digital Communication Technology has now made this 20th Century idea of the Artist, upon which Art as an institution was dependent, unsustainable. In the Information Age we see the dissolution of the 3 signifiers that maintained the status of the Artists as the holder of the power to produce (i.e nominate) artworks.

2) Specialized skills and equipment: user-friendly software has enabled the completion of the de-skilling (actually a de-crafting or de-technique-ing) that began with the readymade – (until the ubiquity of affordable (or free) creative software, many means of production where expensive in themselves and also required expensive training to be able to use) - enabling the democratisation of the means of creative production.

3) Exclusive dissemination spaces and networks (e.g. galleries/museums and arts publications): The Internet, a free network enabling the dissemination of creative output to a potential audience of millions, is available to all.

Therefore the special privileges of access, to A) specialist knowledge B) means of production and C) sites of dissemination, that previously delineated the artist are now available to all. Art relied on artworks, artworks relied on Artists, and Artists relied on the validation of arts institutions in the form exclusive access (to knowledge, means of production, and dissemination networks) that is no longer exclusive. The absence of speciality robs the term 'artist' of any real meaning (if everyone is an artist - then no one is an artist), and without Artists there is no more art. Game over.
Posted by Dan Westlake at 06:39 1 comment: